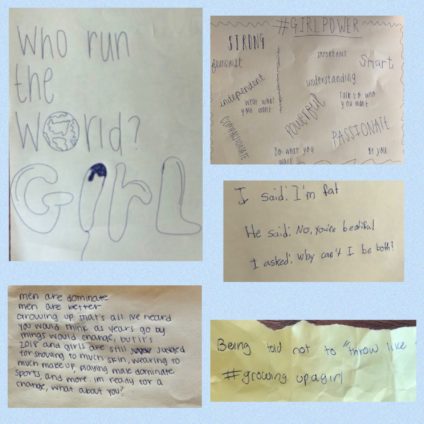 We have incredible people who come to camp as artists-in-residence throughout the summer to share their passion with our campers and staff. This past week, we were lucky enough to have a visit (third year in a row) from author Stacy Davidowitz. Stacy is an author, playwright and screenwriter and we look forward to her time with us each summer. Stacy has done book clubs and creative writing classes here and this week she did some really great activities with our campers….

I started each session with a sound garden – asking the girls to create an orchestra of sounds that build and morph – with the inspiration being “Girls Rising.”

For most of the older campers, we discussed the trending hashtag #growingupagirl. I had each camper write their own “tweet” that captures an experience – positive or negative – of growing up a girl. They then crumpled their tweet, tossed it in the middle of the circle, and chose one of their friends’ tweets at random. Then, after going around the circle and sharing each of them, the campers were given 8-12 minutes to put together a creative expression inspired by any tweet they wrote, read, or heard aloud. That could include a comic, poem, chart, song, rap, skit, letter, diary entry, short story, essay, origami, whatever! They could work in pairs, groups, or solo. Then they shared out.

We closed by discussing the Bechdel test – a litmus test for Hollywood movies where there has to be a scene where two women are talking to each other about anything other than a man. Most Hollywood film fail! From there, we did a writing exercise called “Exquisite Corpse” where each camper writes a line of dialogue on a clean sheet of paper, passes it to their left, receives a line of dialogue on a paper from the right, adds a line of dialogue, folds back the previous line, and then passes it on to the left. Eventually every sheet of paper will have a full dialogue! The goal was to create as many exquisite corpse scenes that pass the Bechdel test as possible. They all passed!

With the younger girls, I read them the Alicia Keys’ poem “A Revelation” – with slight adjustments. Then, I had them fill in the blanks to “I’m allowed to” and “I don’t have to.” What followed was an empowering group poem performed in rhythm!

Stacy is such a pleasure to have at camp. She fits right in, and we love having her here! She is such an inspiration and an incredible role model for our campers. The feeling must be mutual because Stacy told me:

Camp Louise campers are brave, passionate, incredibly curious, and all around inspiring. Working with them summer after summer, encouraging them to be bold and free in their writing, has been a complete joy. Honored to be a part of the fam!

And we feel the same way about you, Stacy!