MIDDAH OF THE WEEK – COURAGE 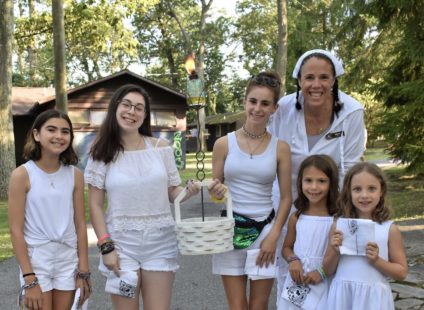 Each week, we focus on a different middah/value. This week was courage/ometz lev (strength of heart). Every day in the Daily, we print conversation starters or quotes about the middah. Here are some from this week:

Courage/ometz lev in Jewish life isn’t always about acts of bravery like scaling Mt. Everest. Instead, it’s about how you take the power of your own heart (lev) and use it to do normal things that scare you.

In the Torah, when Moses is turning over the leadership of the people to Joshua, he says, “Chazak v’amatz* – be strong and of good courage” How would it feel to hear those words from someone you admire when you’re having a hard time? (*related to the middah word Ometz)

“Courage starts with showing up and letting ourselves be seen.”Brene Brown

Some of the campers who demonstrated the middah of courage were honored to light candles with me tonight. Some of the reasons these campers were selected were:

Be brave and Shabbat Shalom!

Since Unit F is the last year that campers can make bunk requests, there are many fun unit activities in store for the session to allow girls in different bunks to get to know each other! This week we did a Backwards Scavenger Hunt, which is something I used to love doing as a camper. The girls were split up into different teams and were asked to fill a laundry bag full of some of their random belongings. Each team was then asked to present different things for points, such as something to wear to prom or a time machine. They used what was in their laundry bag to create something that would fit the task! I was so impressed with the creativity in the unit and loved watching new friendships form!