In the summer of 1986, my second at Louise, I was in bunk 28 with my BFF, Dana.  My family was moving to a new city after camp and I planned to spend the month with Dana doing all the activities we had loved the summer before.  However, as a first-year camper, my younger sister Emily wanted to try out for the play and did not want to go to the auditions alone. So I went to the Wizard of Oz auditions in Solarium, which was then Louise’s primary theater. The Director, Mindy Karasik (known for her portrayal of Snoopy in You’re a Good Man, Charlie Brown), kept calling me back to read and sing again. And again. And back again that afternoon.  I remember the thrill of seeing “Dorothy: Liz Rudnick” taped to the prop room door outside of Solarium. I was so excited, I ran up and down the hill at least three times. My mom still has the letter telling her about it. (Emily, who would go on to many leads of her own at Louise, was cast in the Lullaby League.) 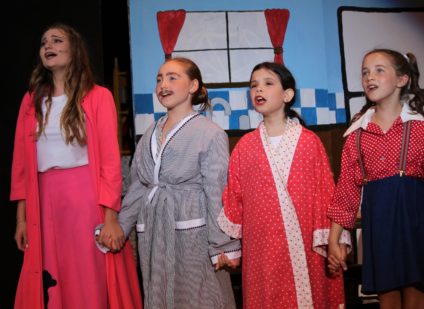 That was the beginning of my camp (and life) theater career.  I spent every summer thereafter doing play after play, Friday night show after Friday night show.  I went from being in an original musical, Dick Tracy (infamous as the year the director—I can’t remember who—decided not to cast any Airy boys in the show), to Anything Goes, to being an Airy “play chick” for several years in Guys and Dolls and Fiddler on the Roof.   (Please note that almost all of these were with the fabulous current camp Assistant Director, Stacy Schwartz Frazier, my fellow 1990 CIT!) My place at Camp Louise was in a rehearsal, on the stage, or just goofing off in between those two things. I lost my voice every summer. (Note to aspiring camp actors: yelling to your friends, singing camp songs at top volume, staying up late, and generally not taking care of your voice will do that every time. It also results in singing music an octave lower than written, which is problematic for a soprano.) 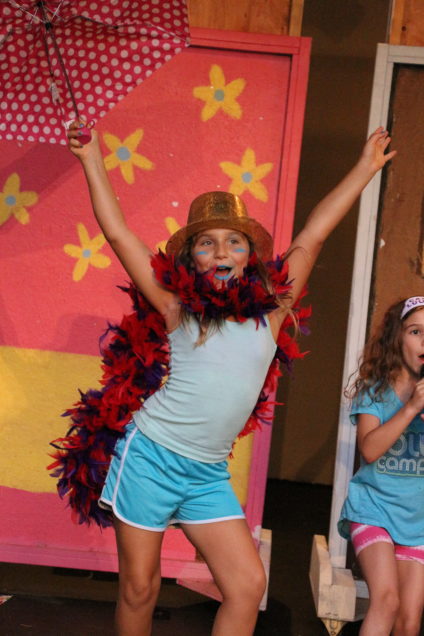 My CA/CIT shows in 1989 and 1990 were in the newly-opened Terrace theater.   I felt so lucky to go to a camp that had a sophisticated theater—not just for assemblies but REAL PLAYS.  Other camps boasted about their waterfronts for sailing, water skiing, or canoeing. But MY camp had an awesome theater! With REAL lights and tech!  As a counselor, I spent three years on the Drama Department staff, teaching improv games and vocal exercises, writing skits, and (co) directing Working (with my soul sister Jennifer Falik Rains) and Pippin (with the super-talented Rabbi Elissa Sachs-Kohen, in her pre-rabbinic days).   I had always been amazed that camp put on a full-scale musical production in a mere three weeks. I gained new respect for that process as I found myself responsible not only for the coaching, blocking, sets, lighting, costumes, and music, but the well-being of the twenty or so campers entrusted to my care. I wanted to make sure their camp play experience was as special and life-forming as mine.  (Hey, cast of 1992’s Working, do you still hear America singing?) 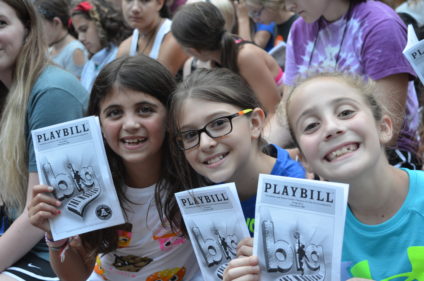 I’ve spent a lot of time in and out of the theater since my camp days.  College saw me constantly in rehearsal and on stage as a Theater Arts minor, and a member of a comedy group that wrote, produced, directed, and performed our own original shows.  After a (long) hiatus and detour through grown-up life, I have returned to my camp theater roots, writing, directing, and performing in musicals for my synagogue and teaching performing arts to children at my kids’ school.  (Side note: when I first applied for professional positions after grad school, my resume was all theater. Interviewers wondered aloud whether perhaps I was in the wrong profession? Perhaps I was.) Theater has always been my heart.  In theater, I found confidence, creativity, the power of expression, the beauty of language, and life long friends (and jazz hands). I found my true comfort zone and happy place. And I found it all first at Camp Louise, and I know Jill’s Place will give that gift to generations to come.

Fiddler on the Roof (Airy)