It was such a hit last session that we repeated it this session!

The day started with taking down our American and Israeli flags and then continued with a crazy day of backwards meals. In the morning, we had flashlight time and our evening activity, followed by activity periods, breakfast in the evening and finally putting up the flag at the end of the day. 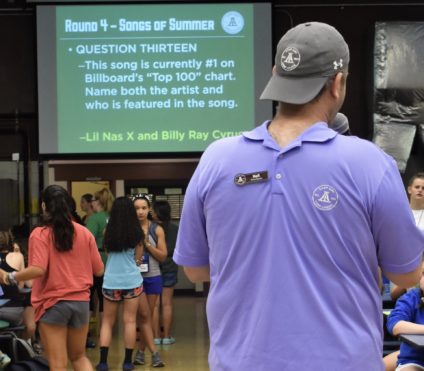 During this crazy day, we had a great evening activity in the morning – TRIVIA NIGHT where the campers worked in teams to score points. They answered questions like:

There used to be a different activity where the farm is now. Name that activity.

After California, Texas and Florida (which are numbers 1, 2, and 3), name 5 of the next 7 largest states by population.

In front of bunk are the steps to nowhere?

How many benches are in Jill’s Place?

And the day ended with THE NEWLYWED GAME with random groups of people answering questions about each other, like:

Which camp menu item best describes the two of you?

For Chanukah, your partner could really impress you by getting you a…

What Disney character does your partner most resemble?

It was a fun mixed up day and it just goes to show….You never know what to expect at Camp Louise!

Sometimes, it’s the unplanned moments that make camp amazing.  Yesterday afternoon, I walked into a Junior Camp bunk during a rest period to ask a question, but ended up staying for a show.  The campers had organized themselves into a spin-off of “America’s Got Talent.”  There were judges, an announcer, contestants, security to whisk contestants who overstayed their welcome off the stage, and an audience.  After a new theme was chosen, mythical creatures, the girls ran off to put on their craziest costumes in under two minutes.  Contestants presented the characters they created and awards were given by the judges in a variety of categories.  In the end, everyone won.  There were smiles from ear to ear and memories of a wonderful rest period to last a lifetime.